An RCT or root canal treatment or nerve treatment is a technique whereby the inside infected part of the tooth, what we call the pulp( the central part of the tooth containing the nerve and the blood supply of the tooth), is cleaned out and the canal/s of the tooth are disinfected. The empty spaces left behind in the roots ( previously occupied by the pulp) are then filled and sealed with a medicated material to block out the air completely, and a filling is placed over everything.

To get to the stage where a RCT is required , the tooth must have got quite badly decayed. However it is the only option at that point to try to save the tooth and avoid extracting it. The procedure usually needs 1 to 3 visits with local anaesthesia ( injection) each time, just the same as if a filling is being done. Even though the procedure has a very high success rate, however it cannot be guaranteed 100 per cent and some root treatments do fail because of factors outside the control of the dentist.

So when is a root treatment indicated? When x rays show that the decay/ caries has reached the nerve/pulp accompanied by severe toothache. Sometimes however there is no pain, just a large deep cavity and a small abscess( pimple) on the gum on the side of the tooth.
When there is a swelling and the tooth is tender on biting, and when the tooth is extremely sensitive to hot and cold.
In other cases following an accidental fracture to the tooth, the nerve gets exposed and a RCT has to be carried out.

Following a RCT the tooth is most likely to be weakened considerably. So in order to prevent it from breaking a cap/ crown should be placed over it a short while after the root treatment has been completed. Many patients fail to realise this and since they don’t feel pain if and when the tooth breaks down, they don’t do anything about it. However the patient must understand that the tooth can still deteriorate further even though there is no pain( since the nerve has been removed) and they run the risk of losing the tooth after all the work which would have been done. So the best thing would be to cap the tooth. 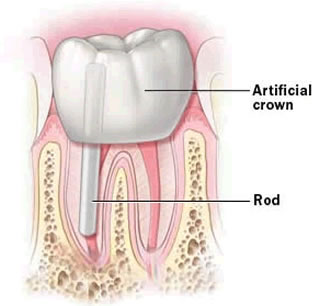 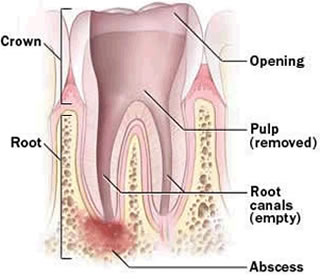